In Ambient Rhetoric, Thomas Rickert seeks to dissolve the boundaries of the rhetorical tradition and its basic dichotomy of subject and object. With the advent of new technologies, new media, and the dispersion of human agency through external information sources, rhetoric can no longer remain tied to the autonomy of human will and cognition as the sole determinants in the discursive act. Rickert develops the concept of ambience in order to engage all of the elements that comprise the ecologies in which we exist. Culling from Martin Heidegger’s hermeneutical phenomenology in Being and Time, Rickert finds the basis for ambience in Heidegger’s assertion that humans do not exist in a vacuum; there is a constant and fluid relation to the material, informational, and emotional spaces in which they dwell. Hence, humans are not the exclusive actors in the rhetorical equation; agency can be found in innumerable things, objects, and spaces. As Rickert asserts, it is only after we become attuned to these influences that rhetoric can make a first step toward sufficiency. Rickert also recalls the foundational Greek philosophical concepts of kairos (time), chora (space/place), and periechon (surroundings) and cites their repurposing by modern and postmodern thinkers as “informational scaffolding” for how we reason, feel, and act. He discusses contemporary theory in cognitive science, rhetoric, and object-oriented philosophy to expand his argument for the essentiality of ambience to the field of rhetoric. Rickert then examines works of ambient music that incorporate natural and artificial sound, spaces, and technologies, finding them to be exemplary of a more fully resonant and experiential media. In his preface, Rickert compares ambience to the fermenting of wine—how its distinctive flavor can be traced to innumerable factors, including sun, soil, water, region, and grape variety. The environment and company with whom it’s consumed further enhance the taste experience. And so it should be with rhetoric—to be considered among all of its influences. As Rickert demonstrates, the larger world that we inhabit (and that inhabits us) must be fully embraced if we are to advance as beings and rhetors within it. 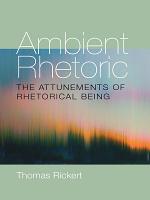 Authors: Thomas Rickert
Categories: Language Arts & Disciplines
In Ambient Rhetoric, Thomas Rickert seeks to dissolve the boundaries of the rhetorical tradition and its basic dichotomy of subject and object. With the advent of new technologies, new media, and the dispersion of human agency through external information sources, rhetoric can no longer remain tied to the autonomy of 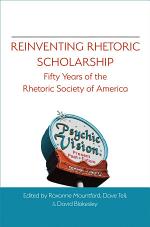 Authors: Dave Tell, David Blakesley
Categories: Language Arts & Disciplines
Reinventing Rhetoric Scholarship: Fifty Years of the Rhetoric Society of America collects essays reflecting on the history of the Rhetoric Society of America and the organization’s 18th Biennial Conference theme, “Reinventing Rhetoric: Celebrating the Past, Building the Future,” on the occasion of the Society’s 50th anniversary. The opening section, “Looking 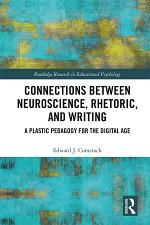 Connections Between Neuroscience, Rhetoric, and Writing

Authors: Edward J. Comstock
Categories: Education
This book argues that contemporary neuroscience compliments, extends, and challenges recent and influential posthuman and new materialist accounts of the relations between rhetoric, affect, and writing pedagogy. Drawing on cutting-edge neuro-philosophy, Comstock re-thinks both historical and current relations between writing and power around questions of affect, attention, and plasticity. In 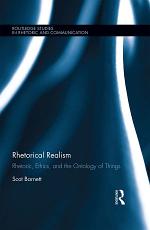 Authors: Scot Barnett
Categories: Language Arts & Disciplines
Rhetorical Realism responds to the surging interest in nonhumans across the humanities by exploring how realist commitments have historically accompanied understandings of rhetoric from antiquity to the present. For a discipline that often defines itself according to human speech and writing, the nonhuman turn poses a number of challenges and 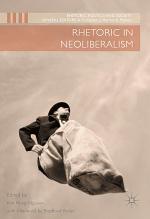 Authors: Kim Hong Nguyen
Categories: Political Science
This volume examines and applies classical and contemporary concepts of rhetorical theory and criticism to the context of late capitalism. Each contributor shows how discourse, its subjects, and power relations are irrevocably transformed by neoliberalism. The collection analyzes a range of discourses and phenomena in neoliberalism including: higher education reforms,