This book gives a coherent explanation of the socio-economic dynamics of Japan from the thirteenth to the twentieth centuries by means of the evolution of internalized culture and the role of culture in the ordering of the market. The author argues that not only institutions but also culture matters in the ordering of the market and economic behavior. In the Occident, institutions have been pivotal in structuring and ordering the market economy and coordinating incentives of economic agents, as is emphasized by Douglas North. The author of this book argues that culture, defined as historically transmitted beliefs and values specific to each nation, may fulfill similar roles by establishing conventions and norms of behavior of individuals. Japan before the Meiji Restoration (1868) seems to be a typical case. The book presents an analysis of the formation of its internalized part of mental model, owing to religious reform in Buddhism in the thirteenth century and the consequent emergence of commerce-based growth driven by a decline in transaction costs in the Tokugawa Era, from the seventeenth through the mid-nineteenth centuries. Institutions had been largely inefficient due to serious cultural conflicts among classes, especially between the samurai and aristocrats. The relative costs of establishing and enforcing institutions were low in the Occident where internalized beliefs were based on the concept of public, by and large common among individuals; by contrast, in Japan, where internalized beliefs were strongly influenced by others nearby, that differed significantly among individuals, the costs were high because of difficulty in sharing mental models. The economic development of the Occident owed largely to the development of industrial technology nurtured under the development of various institutional devices to coordinate activities, whereas the economic growth of Japan during the Tokugawa Era was caused by the decrease in transaction costs in commercial activities owing to the standardization of conduct nurtured through the deliberate development of culture and to the efforts of small producers enhanced by religious motivation. After the Meiji Restoration, Occidental institutions and industrial technology flowed into Japan rapidly, and the Japanese enthusiastically absorbed the Occidental cultural system crystalized in Enlightenment values. At the same time, the struggle of Meiji leaders to establish national integrity and spirit was an attempt to adapt imported Occidental institutions to the traditional internalized culture and to maintain the merits of historical tradition as much as possible. The book argues that it is not easy to implement fusion or substitution of traditional internalized culture with any “advanced” culture of foreign societies.

Culture and Institutions in the Economic Growth of Japan

Authors: Juro Teranishi
Categories: Business & Economics
This book gives a coherent explanation of the socio-economic dynamics of Japan from the thirteenth to the twentieth centuries by means of the evolution of internalized culture and the role of culture in the ordering of the market. The author argues that not only institutions but also culture matters in

Authors: Enrico Spolaore
Categories: Culture
Provides fundamental analyses of the relations between cultural variables and economic performance. It encompasses indispensable contributions by economists and other influential social scientists in this growing interdisciplinary area. 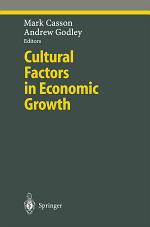 Authors: Mark Casson, Andrew Godley
Categories: Business & Economics
This volume is the product of the "Sixth Annual SEEP-Conference on Economic Ethics and Philosophy" on the theme of 'Cultural Factors in Economic Growth' held at Marienrode Monastry, Hildesheim, in April 1998. Our thanks go to our colleagues (including Avner Offner, whose paper could not be included here), the staff
Language: en
Pages: 100