In December 1950 General Matthew B. Ridgway replaced General Walton Walker as commander of the Eighth Army, and in April 1951 he succeeded Douglas MacArthur as supreme commander of the United Nations forces in Korea and supreme commander of the United States Far East Command. In this spirited book, General Ridgway describes how he took a dispirited army and rebuilt it in a few short months, leading it into battle against the Chinese and North Korean forces, forcing them back over the 38th parallel and ”victory.” It is a book that takes a close look at MacArthur, his failings and brilliance, and a hard look at the idea of limited war. Infused with a humane leader's appreciation for the ordinary fighting soldier, Ridgway's history also teaches important lessons about Vietnam and any future conflict. Above all, he emphasizes: We should not involve ourselves in escalating warfare without a specific and attainable goal. 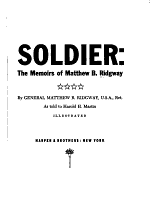 Authors: Matthew Bunker Ridgway, Harold H. Martin
Categories: Generals
"General Matthew Bunker Ridgway (March 3, 1895–July 26, 1993) was the 19th Chief of Staff of the United States Army. He served with distinction during World War II, where he was the Commanding General of the 82nd Airborne Division, leading it in action in Sicily, Italy and Normandy, before taking 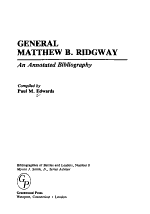 Authors: Paul M. Edwards
Categories: History
This is the most comprehensive bibliography to date of works by and about General Matthew B. Ridgway, one of America's greatest military leaders, covering his long period of service as a professional soldier and diplomat from World War I, through World War II, the Korean War, in the Pacific and 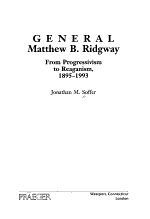