The three great apologies of G.K. Chesterton in one volume: Heretics, Orthodoxy & The Everlasting Man. Gilbert Keith Chesterton has become synonymous with modern Christian apologetics. But his impact goes beyond just those interested in a defense of Christian thought. His writings have influenced such diverse authors as C.S. Lewis, Marshall McLuhan, and Jorge Luis Borges, and remains a subtle and unseen presence in contemporary Catholic thought. At his funeral, Ronald Knox said "All of this generation has grown up under Chesterton's influence so completely that we do not even know when we are thinking Chesterton." Before his conversion from atheism to knowing God, C.S. Lewis, the author of Mere Christianity & The Great Divorce, said "in reading Chesterton, as in reading MacDonald, I did not know what I was letting myself in for. A young man who wishes to remain a sound atheist cannot be too careful of his reading. There are traps everywhere -" Chesterton wrote in a time when materialism and new forms of political theory were soon to cause havoc in the western world. His was a voice calling for restraint - pointing back to the fundamentals of Christian doctrine, the purpose and value of which was being lost in the noise and commotion of the post industrial age. Describing the rush towards less familiar and attractive ideologies, Chesterton wrote: "In the matter of reforming things, as distinct from deforming them, there is one plain and simple principle; a principle which will probably be called a paradox. There exists in such a case a certain institution or law; let us say, for the sake of simplicity, a fence or gate erected across a road. The more modern type of reformer goes gaily up to it and says, 'I don't see the use of this; let us clear it away.' To which the more intelligent type of reformer will do well to answer: 'If you don't see the use of it, I certainly won't let you clear it away. Go away and think. Then, when you can come back and tell me that you do see the use of it, I may allow you to destroy it.'" Chesterton was a man who continually showed us the use of orthodoxy in Christianity - most of all in his three great apologies: Heretics, Orthodoxy & The Everlasting Man. In Heretics, he first points to the flaws in the beliefs of the moderns. In Orthodoxy, he defends the values handed down through millennium of Christian dogma. In The Everlasting Man, he tells the grand story of Christianity itself and the often ignored miracle of its appearance in the life of man. Chesterton was a great debater, often trading blows with modern thinkers such as George Bernard Shaw, H.G. Wells, Bertrand Russell and Clarence Darrow. He became known as the "prince of paradox," He was also a prolific writer, producing biographies on St. Augustine and St. Francis, and touched on many of the varieties of religion in his writings. He wrote fiction as well, authoring the famous Father Brown books and the Man Who Was Thursday. Chesterton was certainly not the imitation of Christ in his personal life. A large man fond of food and drink, he was almost childlike in wonder of the magic of the world, while expressing the wit of an ancient. He gave no secret doctrine or systematic theology, but his "goodness" and basic "common sense" led many to the Church. One commenter stated: first you read C.S. Lewis, then Chesterton, then you become Catholic. Despite his less than temperate life, he is now under investigation by the Church for Beatification: such was his impact. 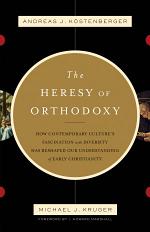 The Heresy of Orthodoxy (Foreword by I. Howard Marshall)

Authors: Andreas J. Köstenberger, Michael J. Kruger
Categories: Religion
Beginning with Walter Bauer in 1934, the denial of clear orthodoxy in early Christianity has shaped and largely defined modern New Testament criticism, recently given new life through the work of spokesmen like Bart Ehrman. Spreading from academia into mainstream media, the suggestion that diversity of doctrine in the early

Authors: G. K. Chesterton
Categories: Religion
The three great apologies of G.K. Chesterton in one volume: Heretics, Orthodoxy & The Everlasting Man. Gilbert Keith Chesterton has become synonymous with modern Christian apologetics. But his impact goes beyond just those interested in a defense of Christian thought. His writings have influenced such diverse authors as C.S. Lewis, 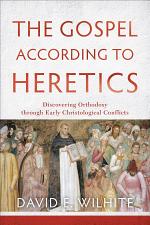 The Gospel according to Heretics

Authors: David E. Wilhite
Categories: Religion
Since what Christian doctrine denies can be as important as what it affirms, it is important to understand teachings about Jesus that the early church rejected. Historians now acknowledge that proponents of alternative teachings were not so much malicious malcontents as they were misguided or even misunderstood. Here a recognized 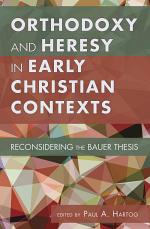 Authors: Paul A. Hartog
Categories: Religion
Eighty years ago, Walter Bauer promulgated a bold and provocative thesis about early Christianity. He argued that many forms of Christianity started the race, but one competitor pushed aside the others, until this powerful "orthodox" version won the day. The victors re-wrote history, marginalizing all other perspectives and silencing their 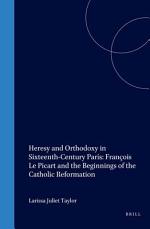 Authors: L. J. Taylor
Categories: History
Through the examination of over 250 sermons by the most popular preacher in Paris before the Religious Wars, Francois Le Picart (1504-1556), this book offers a close look at religious "mentalites" in the French capital in these critical years and offers insight into changing definitions of orthodoxy and heresy.