This two-and-a-half-day symposium has concentrated on main aspects of the rapidly expanding field ofleukocyte markers in hematology. While leukemias are already being 'phenotyped' routinely in clinical centers, continued research on the developmental sta ge of cells and cell membranes, expanding into a malignant clone, permits new snap shots on hemopoietic differentiation. Thus the discovery of leukemia-associated anti gens, which so far have not been found on subpopulations of normal cells, has greatly stimulated the discussion on 'differentiation antigens versus tumor antigens'. The proceedings reflect the considerable success which has been achieved very re cently in the classification of hemoblastomas. Consequently the number of leukemias which are unclassifiable by immunological methods have dwindled down to a small mi nority. New facts give rise to new questions. By including the main points of the discussions in the proceedings, we wanted to give the reader an opportunity to get an impression of the questions and conclusions raised and drawn by the participants on the basis of new - and frequently still unpublished - data. The editors thank both the contributors to this symposium, who made it a successful meeting and submitted their manuscripts punctually, and the publishers, who have provided a volume of high quality in good time. They are also grateful for the valuable cooperation from numerous colleages at the Institut fUr Hamatologie. 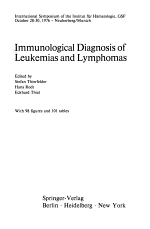 Immunological diagnosis of leukemias and lymphomas