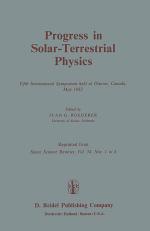 Authors: J.G. Roederer
Categories: Science
Solar-Terrestrial Physics: The Study of Mankind's Newest Frontier Solar-Terrestrial Physics (STP) has been around for 100 years. However, it only became known as a scientific discipline under that name when the physical domain studied by STP became accessible to in situ observation and measurement by man or man-made instruments. Indeed,
Language: en
Pages: 423