The book is intended for researchers and professionals interested in understanding how to design and make a preliminary characterization of Radiation Hardened (rad-hard) analog and mixed-signal circuits, exploiting standard CMOS manufacturing processes available from different silicon foundries and using different technology nodes. It starts with an introductory overview of the effects of radiation in space and harsh environments with a specific focus on analog circuits to enable the reader to understand why specific design solutions are adopted to mitigate hard/soft errors. The following four Chapters are devoted to RHBD (Radiation Hardening by Design) techniques for semiconductor components applied to Operational Amplifiers, Voltage References, Analog-to-Digital (ADC) and Digital-to-Analog (DAC) converters. Each Chapter is organized with a first part which recalls the basic working principles of such circuit and a second part which describes the main RHBD techniques proposed in the literature to make them resilient to radiation. The approach follows a top-down scheme starting from RHBD at circuit level (how to mitigate radiation effects by handling transistors in the proper way) and finishing at layout level (how to shape a layout to mitigate radiation effects). The last-but-one Chapter is devoted to a special class of analog circuit, the dosimeters, which are gaining importance in space, health and nuclear applications. By leveraging the characteristic of a Flash-memory cell, a re-usable dosimeter is described which includes the sensitive element itself, the analog interface and the process of characterization. The last part is an overview of the strategies adopted for the testing of analog and mixed-signal circuits. In particular, it will focus also on the measurement campaigns performed by the Authors aiming for the characterization of developed rad-hard components under total dose (TID) and single-events (SEE). Technical topics discussed in the book include: - Radiation effects on semiconductor components (TID, SEE) - Radiation Hardening by Design (RHBD) Techniques - Rad-hard Operational Amplifiers - Rad-hard Voltage References - Rad-hard ADC - Rad-hard DAC - Rad-hard Special Circuits - Testing Strategies

Authors: Umberto Gatti, Cristiano Calligaro
Categories:
The book is intended for researchers and professionals interested in understanding how to design and make a preliminary characterization of Radiation Hardened (rad-hard) analog and mixed-signal circuits, exploiting standard CMOS manufacturing processes available from different silicon foundries and using different technology nodes. It starts with an introductory overview of the 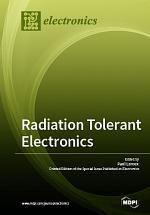 Authors: Paul Leroux
Categories: Technology & Engineering
Research on radiation-tolerant electronics has increased rapidly over the past few years, resulting in many interesting approaches to modeling radiation effects and designing radiation-hardened integrated circuits and embedded systems. This research is strongly driven by the growing need for radiation-hardened electronics for space applications, high-energy physics experiments such as those 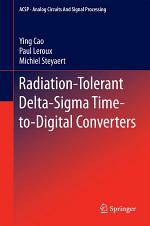 Authors: Ying Cao, Paul Leroux, Michiel Steyaert
Categories: Technology & Engineering
This book focuses on the design of a Mega-Gray (a standard unit of total ionizing radiation) radiation-tolerant ps-resolution time-to-digital converter (TDC) for a light detection and ranging (LIDAR) system used in a gamma-radiation environment. Several radiation-hardened-by-design (RHBD) techniques are demonstrated throughout the design of the TDC and other circuit techniques 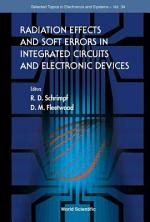 Authors: Dan M. Fleetwood, Ronald Donald Schrimpf
Categories: Technology & Engineering
This book provides a detailed treatment of radiation effects in electronic devices, including effects at the material, device, and circuit levels. The emphasis is on transient effects caused by single ionizing particles (single-event effects and soft errors) and effects produced by the cumulative energy deposited by the radiation (total ionizing 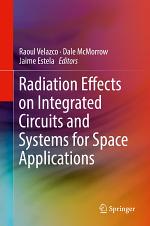 Radiation Effects on Integrated Circuits and Systems for Space Applications

Authors: Raoul Velazco, Dale McMorrow, Jaime Estela
Categories: Technology & Engineering
This book provides readers with invaluable overviews and updates of the most important topics in the radiation-effects field, enabling them to face significant challenges in the quest for the insertion of ever-higher density and higher performance electronic components in satellite systems. Readers will benefit from the up-to-date coverage of the