Social media are becoming the dominant source of information for significant parts of our societies. There are numerous positive aspects of these media, such as their ability to mobilise for a political cause. No one can deny that social media strengthen free speech in general, allow greater and quicker flows of ideas across societies, and add to the quality of life. Yet at the same time, social media may sometimes negatively impact the public debate. This paper analyses how social media platforms influ-ence democracy in Western countries and makes recommendations on how to address the risks that arise effectively. The first section describes the phenomena of fake news, echo chambers and social bots. The paper then discusses the ways in which fake news, bots and bubbles impact the public debate. Examples from the recent past (the US, French and German elections and the UK referendum) are debated. In the third part, the paper outlines the current regulatory framework in which social media operate, both in the EU member states and in the US. The peculiar status of ‘Internet intermediaries’ is also analysed.The following section discusses the different voluntary measures self-imposed by social media companies to eradicate fake news from their feeds. Their effectiveness is assessed.In the fifth section, a novel way of fighting fake news is introduced. The author suggests that social media platforms should be considered media companies and that they should be regulated by modi-fied versions of existing press laws, adapted to suit the new technology. The creation of a ‘notice and correct’ procedure, as it is tentatively called, would provide an effective tool to stop lies from spread-ing, allowing affected parties, public or private, to protect their rights. By making the social media plat-forms jointly responsible for the content they publish, governments would create the right incentives for companies to adapt their business models and to modify the construction of their algorithms and policies. The concept of a ‘notice and correct’ procedure is discussed in the context of the freedom of speech: the risks and challenges are analysed. It is underlined that any attempt at censorship must not be tolerated.In the final section, the paper discusses the improvement of e-literacy as an additional, viable and long-term solution to the problem of fake news. It concludes by identifying the right conditions under which the ‘notice and correct’ procedure could be implemented.

Authors: Konrad Niklewicz
Categories: Fake news
Social media are becoming the dominant source of information for significant parts of our societies. There are numerous positive aspects of these media, such as their ability to mobilise for a political cause. No one can deny that social media strengthen free speech in general, allow greater and quicker flows 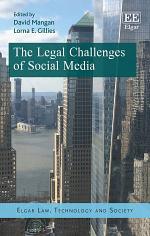 The Legal Challenges of Social Media

Authors: David Mangan, Lorna E. Gillies
Categories: Computers
Social media enables instant access to individual self-expression and the sharing of information. Social media issues are boundless, permeating distinct legal disciplines. The law has struggled to adapt and for good reason: how does the law regulate this medium over the public/private law divide? This book engages with the legal 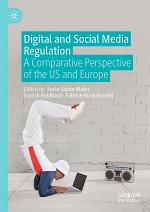 Authors: Sorin Adam Matei, Franck Rebillard, Fabrice Rochelandet
Categories: Social Science
Digital and social media companies such as Apple, Google, and Facebook grip the globe with market, civic, and political strength akin to large, sovereign states. Yet, these corporations are private entities. How should states and communities protect the individual rights of their citizens – or their national and local interests

Authors: Corinne Tan
Categories: Copyright
How are users influenced by social media platforms when they generate content, and does this influence affect users' compliance with copyright laws? These are pressing questions in today's internet age, and Regulating Content on Social Media answers them by analysing how the behaviours of social media users are regulated from