This expanded and revised graphic edition of The Case of the Drowning Men has been issued to address developments and breakthroughs in the 'Smiley Face Murders' and includes more photos, forensics and victim profiles. It now also provides survival tips on how to avoid becoming a Smiley statistic, as well as a guide for what to do if your own young man goes missing and is later "found drowned." Much has been happening in the decades-long kill spree since the author's first investigation into the drowning men homicides was published in 2012, and this enhanced volume will bring both newcomers and longtime case followers up to date. This expanded and revised print edition also contains additional images, such as autopsy and water recovery photos, which some sensitive readers may find gory and disturbing. These are included out of scientific necessity, not for shock value. As with the first edition, you'll still find the only in-depth overview and analysis available of an unsolved serial case that has confounded waterfront communities, coroners and cops ever since 1997, and which in recent years has spread from the original killing fields of North America internationally. With hundreds of victims tallied in the United States, Canada and abroad now, no other serial murderers in the history of serial murdering have come anywhere near the body count of the 'Smiley Face Killers.' And that death toll continues to climb. Learn everything there is to know about this elusive criminal gang, their widening victimology, and what progress is being made in the ongoing effort to capture them in The Case of the Drowning Men, by true crime writer Eponymous Rox. FEATURED CUSTOMER REVIEWS: Five-star review by Lauren Ward, sister of Smiley Face Killer victim, Matt Ward, who disappeared from Indianapolis in the winter of 2012 and was found drowned in the White River: "Highly Recommended - I highly recommend this book. It is extremely well researched and well written...The reader is encouraged to look at the facts and form their own opinions. I came across this book after my own brother, Walton Matthew Ward, was murdered in October 2012 and his body dumped in the White River in Indianapolis, IN. It quickly became apparent that law enforcement had no plans of investigating, and essentially planned to sweep his case under the rug as I now know they have done to so many others. My family and I began trying to compile as much information as possible so that someday we might get answers [and] identify the discrepancies on many different levels between a true drowning death and a death that has been made to look like one. I then bought this book and am glad I did, there was a lot of information in it that I had not found while doing research of my own. I especially recommend this book if you are a college age man or a relative of a college age man, the knowledge is invaluable and potentially lifesaving." Five-star review by Robert Rodgerson: "Great Introduction and Analysis to Smiley Face Killers Theory - The author does a good job detailing many of the unusual and baffling circumstances around these deaths...Overall the book was very interesting for anyone interested in unsolved mysteries..." Five-star review by 'Aliza': "Fascinating and Chilling - As a mother of a smart and handsome son, I'm glad I read it. This is a must read for young men and those that care about them." Five-star review by 'Robert': "Well-Crafted and Thought-Provoking Investigation - I have just finished this book and Rox's follow-up "Hunting Smiley" ... The statistics, logistics and science of drowning described in detail by Rox were new to me (and probably all but a few professionals); it reflects substantial research by the author presented in a clear, informative manner.. . So when's the movie coming out?"

The Case of the Drowning Men

Authors: Eponymous Rox
Categories:
This expanded and revised graphic edition of The Case of the Drowning Men has been issued to address developments and breakthroughs in the 'Smiley Face Murders' and includes more photos, forensics and victim profiles. It now also provides survival tips on how to avoid becoming a Smiley statistic, as well

The Case of the SMILEY FACE KILLERS

Authors: Stephen Young
Categories:
From Bestselling author Steph Young; An investigation into the Horrifying Case of ' The Smiley Face Killers.' For the past 20 years, hundreds of college-aged men have disappeared, silently, soundlessly, vanishing without trace, only to be found some time later, dead in the water, but with no water in their
Language: en
Pages: 196

The CASE of the DROWNING MEN: Investigating the Smiley Face Serial Murders

Authors: Eponymous Rox
Categories:
CONTENTS AND READER REVIEWS: This expanded and revised graphic edition of The Case of the Drowning Men has been issued to address developments and breakthroughs in the 'Smiley Face Murders' and includes more photos, forensics and victim profiles. It now also provides survival tips on how to avoid becoming a

Authors: Jack Smith
Categories:
Keith Hunter Jesperson, The Sad Story of the Happy Face Killer Stories about serial killers are incredibly popular. Tracking down a mass murderer is a constant plot line in films, television, and literature. But these stories are so often based on real life. In certain circumstances, however, real life goes 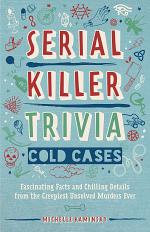 Authors: Michelle Kaminsky
Categories: Games & Activities
The ultimate collection of fascinating facts, stories, and trivia from the most infamous cold cases from around the world. From England’s Jack the Ripper and the Axeman of New Orleans to lesser-known cases like Detroit's Bigfoot Killer and Cleveland’s Torso Murderer, this trivia book is packed with information about some