Volume I contains the first three Thorndyke novels, published in 1907, 1911, and 1912, respectively. Set in London during the time that Sherlock Holmes was still in practice, these introduce us to Thorndyke and his world, as well as painting a vivid picture of the London of that era... The Red Thumb Mark - In which Dr. Jervis encounters his old friend, Dr. Thorndyke. Soon after, they're drawn into a mystery where a man is accused of murder, and his own bloody thumbprint, evidence that cannot be denied, places him absolutely at the scene of the crime. As Thorndyke investigates, it becomes apparent that he is too much of a threat and must be removed... The Eye of Osiris - Wherein a man vanishes and is presumed dead. But from where and when exactly did he disappear? That is the initial question, but by the end it's much more complex, with one of the most unique solutions in mystery history! The Mystery of 31 New Inn - Dr. Jervis is summoned at night by closed carriage to treat a gravely ill patient - but is he simply sick or being murdered? His suspicions continue to grow, and Thorndyke provides a unique solution. But that's only half, as the two also become involved in an unusual death related to a young man's inheritance. You know Sherlock Holmes of Baker Street. Now meet Dr. John Thorndyke of 5A Kings Bench Walk, London. When Sherlock Holmes began his practice as a "Consulting Detective", his ideas of scientific criminal investigations caused the London police to look upon him as a mere "theorist". And yet, through his work, the science behind catching criminals became so important that it's hard to now imagine the world without them. Many famous Great Detectives followed in Holmes's footsteps - Nero Wolfe and Ellery Queen, Hercule Poirot and Solar Pons - but before they began their careers, and while Holmes was still in practice in Baker Street, another London consultant - Dr. John Thorndyke - opened his doors, using the scientific methods developed and perfected by Holmes and taking them to a whole new level of brilliance. Between 1905, with his first appearance in a nearly forgotten novella to 1942, and through the course of twenty-one novels and over forty short stories, Dr. Thorndyke, often with the assistance of his friend Dr. Christopher Jervis, unraveled some incredibly complex puzzles. Besides providing very satisfying mysteries - some of which turned the literary form inside out - these adventures present vivid pictures of England in the late Victorian and early Edwardian eras, ranging from the doctor's own vividly drawn chambers at 5A Kings Bench Walk in the Temple to the surrounding London streets, and beyond into the villages and towns of the countryside. Many of the Thorndyke volumes have been difficult to obtain for decades. MX Publishing is proud to announce the return of Dr. Thorndyke in a collection of omnibus editions, bringing these masterful adventures of one of the world's greatest detectives together in an easily available format for modern readers. "Thorndyke will cheerfully show you all the facts. You will be none the wiser..." - Dorothy L. Sayers, Chronicler of Lord Peter Wimsey 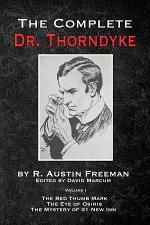 Authors: R. Austin Freeman
Categories: Fiction
Volume I contains the first three Thorndyke novels, published in 1907, 1911, and 1912, respectively. Set in London during the time that Sherlock Holmes was still in practice, these introduce us to Thorndyke and his world, as well as painting a vivid picture of the London of that era... The 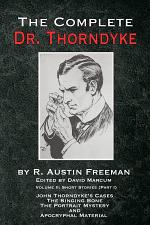 Authors: R. Austin Freeman
Categories: Fiction
Volume II contains roughly the first half of the Thorndyke Short Stories. In all, there are over forty Thorndyke short stories, spread over six books. This volume contains the fifteen short stories from the first three, John Thorndyke's Cases, The Singing Bone, and The Great Portrait Mystery. Some of the

Authors: R Austin Freeman
Categories: Fiction
Volume VIII contains the sixteenth, seventeenth, and eighteenth full-length Thorndyke adventures, published in 1934, 1936, and 1937, respectively. For the Defense: Dr. Thorndyke - Andrew Barton dreaded meeting up with his identical cousin that he usually tried to avoid. Then Death joined them, and Andrew found himself in an unbelievable 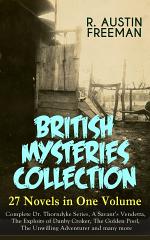 BRITISH MYSTERIES COLLECTION - 27 Novels in One Volume: Complete Dr. Thorndyke Series, A Savant's Vendetta, The Exploits of Danby Croker, The Golden Pool, The Unwilling Adventurer and many more

Authors: R. Austin Freeman
Categories: Fiction
This carefully crafted ebook: "BRITISH MYSTERIES COLLECTION - 27 Novels in One Volume: Complete Dr. Thorndyke Series, A Savant's Vendetta, The Exploits of Danby Croker, The Golden Pool, The Unwilling Adventurer and many more" is formatted for your eReader with a functional and detailed table of contents. Richard Austin Freeman

Authors: R Austin Freeman
Categories: Fiction
Volume VII contains the thirteenth, fourteenth, and fifteenth Thorndyke novels, published in 1931, 1932, and 1933, respectively. Pontifex, Son, and Thorndyke - Jasper Gray is an enterprising fellow going about his typical day when he's drawn into a series of curious events. Meanwhile, Thorndyke is consulted on a seemingly unrelated