The formative ideas for this symposium originated in 1978 at the IAU Symposium No. 83 on "Mass Loss and Evolution of O-type Stars" held at Qualicum Beach, Vancouver Island, Canada - WR stars generally figure prominently in O-star meetings and vice versa! Following general appro val by the IAU Executive Committee the initial ideas were cemented at a subsequent meeting, IAU Colloquium No. 59 on "The Effects of Mass Loss on Stellar Evolution", held at Miramare, Trieste, Italy in 1980, which was attended by the ma,jority of the present Scientific Organising Committee and at which meeting the outline programme for this symposium was formulated. 1981 was considered an appropriate year in which to hold a meeting on WR stars, since the last IAU Symposium devoted to this stellar class had been held a decade earlier, in Buenos Aires (IAU Sym posium No. 49), and during this intervening period a wealth of new observational material had been obtained for WR stars together with significant advances on the theoretical front. The venue for this sym posium was chosen from the requirement, which can be inferred from the above, that a meeting on 'hot' stars take place in an appropriate, sunny climate and followed upon the excellent suggestion of Dr. C. Firmani to hold the symposium in Mexico. 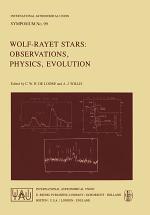